I live in New Orleans and believe the taste to be authentic. Due to previous reviews about it being too runny, I drained the tomatoes (I used diced tomatoes with onion, celery, and green peppers). 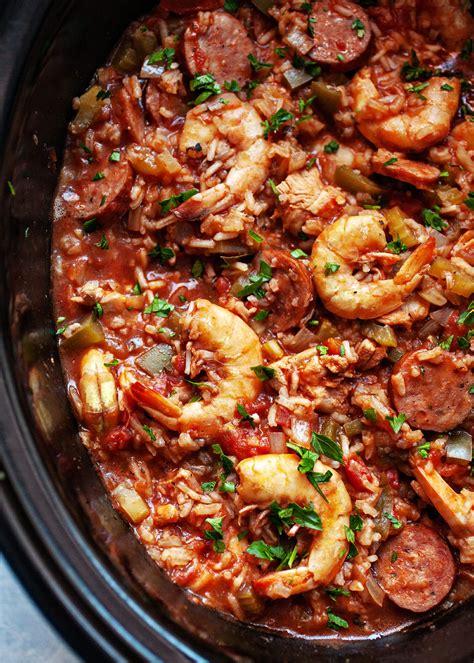 I omitted the pepper (my family doesn't like them), and added 4 or so cloves of sliced garlic (a must!). I used Tony Chancier's seasoning, and only 1/2 tsp.

Cayenne and I thought it was perfect, but some (like my mother-in-law who is very sensitive), might find it a big spicy (nothing a little sour cream on top won't fix :D). Finally, I planned on adding rice directly in the crock pot, but it turned out to actually be too dry (maybe because it cooked for 9 1/2 hours), so I had to cook the rice separately, then stirred it in with about 1/2 cup of extra chicken broth.

I used turkey sausage instead and left out the Cajun seasoning because my kids will not eat anything with a lot of spice. I cooked the rice separate and then mixed it together.

This says it is a serving for 12 (but it made 17 cups for me) enough to have it again for another night. I am putting down information if anyone is interested and this is based on what I used.

I love the combination of chicken, sausage and shrimp. I don't like cooked celery, so I omit that...and I serve it over red beans a rice that I make from a package, instead of plain white rice.

But let me tell you, the flavor of this stuff absolutely rocks!! If the “soapiness” bothers you, put your cooked rice in ahead of time and it will absorb liquid.

Of the Creole Seasoning recipe on this site instead of the seasonings listed (gives much more flavor). I also found that 4 hours in my slow cooker is plenty of cooking time and I don't end up with mush! The last 1/2 hour of cooking I add the shrimp and 2C. Of instant brown rice.

I don't like things either spicy and this had kick but was not too hot. I also would make the rice separate and pour the jambalaya over it.

I tried adding the rice to the crock pot and it absorbed all the liquid too quickly not allowing the rice to fully cook. I am from Louisiana and know a good jambalaya, so I was a bit skeptical.

I did a couple of things differently but not enough that it completely changed the recipe. I added the full can of chicken broth (didn't want to waste the little that was left), 1 can of tomato paste, 1 bay leaf, and instead of all the individual herbs/spices I just used 1.5 tablespoons of the Creole Seasoning Blend that is found on the site (I use it a lot already and it had all the same herbs and spices called for in this recipe). 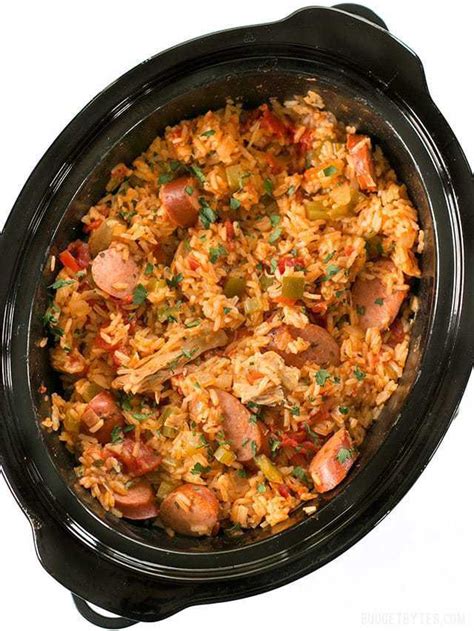 I added in the shrimp (uncooked, frozen) and 4 cups of cooked rice and let it cook for another 30 minutes. Perfect texture and consistency.

Jambalaya has rice cooked together with the rest of the ingredients and it’s not soupy. I’ll stick with a more authentic recipe like the “Oven Baked Jambalaya on this site.

And be sure to try the “Creole Seasoning Blend”, also on this site, IT ROCKS! I assembled it the night before a company potluck, then took it to work and plugged it in at the office.

I committed the shrimp, and in the last 1/2 hour of cooking, I added about 7 servings worth of INSTANT rice to the pot, and let it cook. The only thing I really changed was that I used a Creole seasoning blend in lieu of the seasonings it calls for.

The combo of sausage, chicken, and shrimp with Creole seasoning and rice is always a winner in my book. There are a few things to watch out for when assembling the recipe, but if you follow the tips below, you’ll be left with a great jambalaya that’s sure to please a crowd on a chilly winter day. 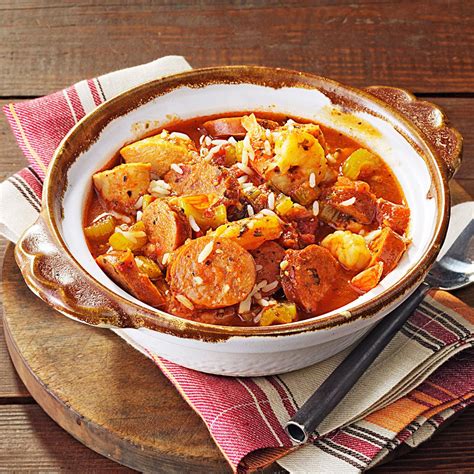 The base ingredients for these two classic Creole dishes are almost identical. The main difference is that gumbo incorporates a roux, or some sort of thickener, and is served either by itself, almost like a chili, or over a bed of rice.

Jambalaya is more like arrow con poll, in that the rice and other ingredients cook together. I like Tony Chancier’s Original Creole seasoning which is a classic and available in most supermarkets nationwide.

If you want to make your own Creole seasoning, you can get a good result by stirring together the following: Store whatever you don’t use for this recipe in a tightly covered container.

Almost any classic Creole recipe will start with what’s often referred to as the “holy trinity” of onion, bell pepper, and celery. This is a great start to so many recipes, and you better believe I include it in this slow cooker version as well.

Take the time to dice your vegetables to a similar size, so they cook at the same rate, and you don’t end up with any huge chunks. The shells add a lot of flavor to the dish and also help prevent the shrimp from becoming overcooked and rubbery during slow cooking, which is why we leave them on.

But cutting them up the backs now will make them easier to peel at the table when eating. If you toss all the ingredients in this recipe in a slow cooker and hit go, you would be in for disappointment after 3 to 4 hours of cooking.

Stage one is for cooking the trinity, garlic, spices, tomato, chicken, and sausage. The final cooking time might vary a bit depending on your exact slow cooker.

You are ready to move onto the next step when the veggies are very tender and the chicken is cooked through and you can pull it easily apart. 2 Add the shrimp and cook on high: Leave the shells on the shrimp, but use kitchen shears to cut up the backs; this will make them easier to peel later.

Season with salt and pepper to taste and garnish with fresh chopped parsley. Leftovers will keep in the fridge in air-tight containers for 2 to 3 days and then the shrimp start to really break down. 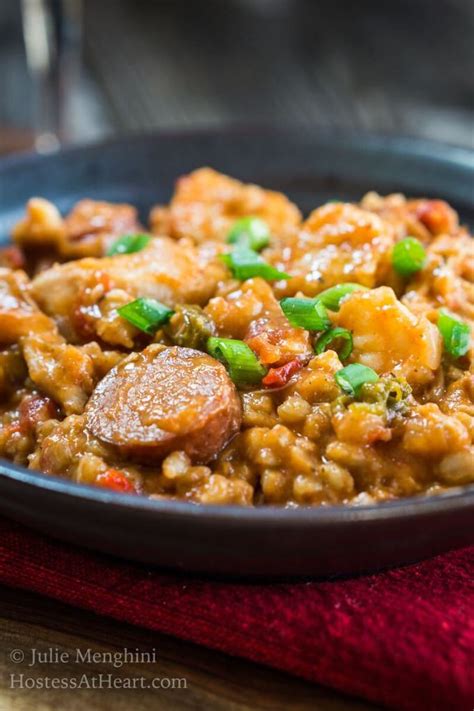 Products We Love Nick has been writing delicious recipes for the home cook for almost a decade. He lives in Denver, CO and embraces a delicate balance of diaper changing, trail running and beer drinking.

07/30/2012 Made it just as ordered, except I put in less creole seasoning(I don't like real hot foods). Tasted great, BUT, the rice turned to mush.

Next time I'm going to cook all the ingredients, minus the rice, in the cooker and cook the rice separate. Then as a final, pour the jambalaya over the rice on the plate.

05/10/2012 My favorite part about this dish was that it came together quickly and with basically minimal effort but I couldn't make it again without changing some things. The recipe didn't say whether to drain the tomatoes, so I didn't and found the end result to be more like the consistency of a stew.

(Besides the fact that my Cajun husband pointed out that true jambalaya doesn't have tomatoes anyway.) So next time I would either drain the tomatoes or eliminate them altogether.

Also, it was way too spicy for our kids to the point that they couldn't finish their dinner, so I would use less than the 1 T. of Cajun seasoning that is called for. This isn't nearly as good as my homemade jambalaya but I will keep the recipe because I typically have all the ingredients on hand and it's easy to throw together on those days that you're rushed or haven't planned even if you don't put it in the crackpot until 1 p.m.

07/22/2012 Tasted good however the rice MUST go in later on as by the end it was close to a mushy paste in consistency. As another reviewer also mentioned I suggest that you also drain the tomatoes before adding them.

Next time I'll cook the rice separately and put the jambalaya over it. 01/24/2014 Good flavor but adding the rice at the beginning turned out to be a disaster.

03/24/2014 It came out tasty but I do agree with the comment regarding the rice. I would put it in much later or cook it separate.